Birthstones are gemstones corresponding to one of the 12 months of the year, each with its own unique look, value and beauty. The use of birthstones as amulets and adornments dates back to ancient times when gemstones were believed to hold wondrous cosmological powers and bring good luck and health.
Today gifts featuring birthstones such as birthstone jewellery stills holds significant meaning and value. Birthstone jewellery gifts adorned with a birthstone shows thought and personalization as well as adds a luxurious sparkle to any accessory. Find here your unique birthstone and learn its natural properties and well as its fabled mystical benefits.

Why Do Some Months Have Multiple Birthstones?

Traditionally each month is associated with one birthstone but you will find some months have multiple birthstones. This fact does create some confusion but the multiple options for some months was created in order to allow more affordable options in addition to the traditional more expensive stones.
The final attempt to standardize the birthstone system came in October 2002 when December was given a third birthstone option.

JANUARY
Garnet, January’s birthstone, is mined in every colour except blue. The most common garnet featured in birthstone jewellery is a dark, deep red that is almost brown. The Garnet is associated with faith, love and constancy and due to such properties is considered a great gift to symbolize friendship and trust.
Learn about Garnet

FEBRUARY
Purple Amethyst, the birthstone of February, is variety of quartz that shines a beautiful purple colour. This gemstone is said to represent peace, serenity, and royalty. Ancient Greeks were known to wear the amethyst to protect themselves from the effects of drunkenness.
Learn about Amethyst

MARCH
The name Aquamarine, the March birthstone, comes from the Latin phrase, “water of the sea” due to its mesmerizing blue­green colour. Its colours range from pale to deep blue and is said to be mermaid treasure and was thought to have the powers to keep sailors safe. The aquamarine gemstone is said to represent courage, health and confidence.
Learn about Aquamarine

APRIL
The diamond, the birthstone of April, is the most coveted gemstone. A diamond is the hardest natural substance and is the only gemstone prized for its complete lack of colour. While the classic white diamond is most oftenly seen, diamonds can be mined in many colours; yellow and brown being the most common. The rarest and most prized coloured diamond is the brilliant blue diamond. The April birthstone, the diamond, due to its brilliance and fire has become the symbol of love.
Learn about Diamond

MAY
Emerald, the May birthstone, is a rich green colour that is reminiscent of mother nature and springtime. The most valued Emeralds are mined in Colombia and there deep green colour that reflects the jungles in which they are found. Emeralds have become a symbol of rebirth and love.
Learn about Emerald

JUNE
The two birthstones of June are Pearl and Alexandrite. The Alexandrite, a spectacular and cherished gemstone, is known as the colour change gem as it changes colour based on the lighting. Pearls are extremely popular due to its elegant natural beauty. Pearls are formed when an irritant, such as a piece of sand, enters an oyster. The oyster coats the piece of sand over and over to form a pearl and give the pearl its iridescence shimmer.
Learn about Alexandrite

JULY
The ruby, the birthstone of July, is a majestic red gemstone that is known as the king of gems. Rubies represent health, wisdom and courage. It was once believed that wearing a Ruby gemstone brought good fortune to its owner. The finest rubies are mined in Burma and are the second hardest gemstone, after diamonds.
Learn about Ruby

AUGUST
Peridot, the birthstone of August, is a dazzling lime green colour. The peridot is one of only a few gemstones that exists in only one to bring prosperity, fertility and healing.
Learn about Peridot

SEPTEMBER
Sapphire, the birthstone of September, is most popular in its varying majestic blue colours. Its name is derived from sappheiros the Greek word for blue. However the, the gemstone sapphire is allochromatic which means it can be found in every colour. The Sapphire has come to represent loyalty and trust.
Learn about September

OCTOBER
Tourmaline and Opal are the two birthstones of October. Tourmaline is available in a rainbow of beautiful colours but most often comes in a pretty pink. Opal gemstones are truly unique because each opal sparkles with a one of a kind colour combination. Each opal gem is individual and unique like no other.
Learn about Opal / Tourmaline

NOVEMBER
November is assigned two unique birthstones, Citrine and Yellow Topaz. Citrine is from the French word citron meaning lemon, named appropriately for its brilliant yellow colour. The Citrine is believed to be a healing gemstone and was once believed to be a gift from the sun. November’s alternative birthstone, Topaz, is most desired in its orange Imperial Topaz colour. However topaz is mined in a variety of rich colours like blue, pink, and yellow.
Learn about Yellow Topaz / Citrine

DECEMBER
December has claim to three birthstones, Zircon, Tanzanite and Turquoise. All three of these precious gemstones shine in different shades of brilliant blues. Their blue tones make these gems the perfect birthstones for the cold wintry month of December.
Learn about Zircon / Turquoise / Tanzanite 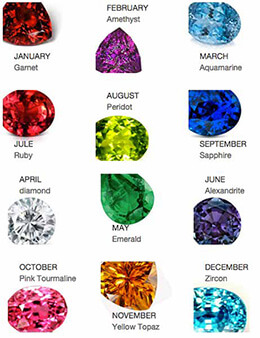 Get your social on
Related Products
WISHLIST
Attach your wishlist to your email address and check on your favorite items easily.
Save my wishlist
By saving your wishlist you agree to our Privacy Policy
-38% 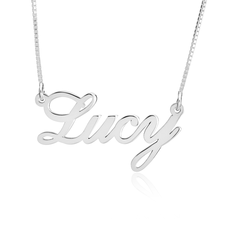 Classic Name Necklace
C$53.95
(710)
WISHLIST
Attach your wishlist to your email address and check on your favorite items easily.
Save my wishlist
By saving your wishlist you agree to our Privacy Policy
-38% 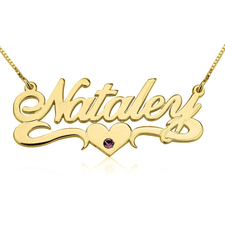 Birthstone Name Necklace
C$79.95
(10)
WISHLIST
Attach your wishlist to your email address and check on your favorite items easily.
Save my wishlist
By saving your wishlist you agree to our Privacy Policy
-22%

Sideways Initial Necklace
C$46.95
(9)
WISHLIST
Attach your wishlist to your email address and check on your favorite items easily.
Save my wishlist
By saving your wishlist you agree to our Privacy Policy
-20% 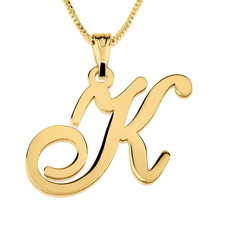 Initial Pendant Necklace
C$53.95
(18)
WISHLIST
Attach your wishlist to your email address and check on your favorite items easily.
Save my wishlist
By saving your wishlist you agree to our Privacy Policy
-29% 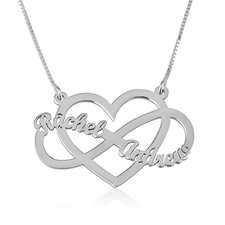 You're signed up!
We've sent you an email with your 15% off coupon code.
Happy Shopping!
START SHOPPING​
get instant answers:
X